This list was created from the results of a poll administered through the Art Libraries Society of North America (ARLIS/NA) Graphic Novels Special Interest Group’s email listserv. Respondents of the poll were asked to select titles that they believed were “innovative, memorable, or significant in the field, especially in terms of their artwork.” Selections for the list were published in 2016 and are considered "graphic novels," defined by the Oxford Companion to English Literature as "[a] term used to distinguish longer, more complex single works of sequential art conceived or developed as a unified work, from periodical comic books." The list has been compiled alphabetically by title. The primary objective of this list is to assist fellow (art) librarians/information professionals in improving their own institutional collections of graphic novels.

1. Black Panther: A Nation Under Our Feet, Volume 1

King and Protector of the fictional African country of Wakanda, T’Challa (the Black Panther) is dealing with his country in turmoil after the death of his sister (former Queen and Black Panther) in battle. The writing, by prolific journalist and author Ta-Nehisi Coates, simultaneously adds depth and humanity to a superhero series. T’Challa is a character readers can respect but also identify with. The art, by Brian Stelfreeze, feels mostly typical for a superhero comic but greatly utilizes positive and negative space that makes his work something more than just a superhero comic.

If you’re not familiar with comics in the Marvel and DC Universes, you might think that because this is a new series that it’s a non-confusing place to jump in. However, Coates’ run on Black Panther provides no backstory and drops the reader directly into a conflict. It’s still quite readable, but for those interested, some background information is given in Roxane Gay’s World of Wakanda that clarifies events discussed. This is a popular and, given the need for more representation in the world of comics, an important series to add to any graphic novel collection. 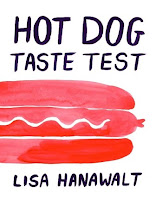 Hot Dog Taste Test is a hodgepodge of quirky tales stitched together by creator Lisa Hanawalt in her usual irreverent sense of humor. Hanawalt, who is a producer and designer for the Netflix original cartoon series BoJack Horseman, presents a colorfully illustrated stream of consciousness, a smattering of personal odd thoughts and observations. Contents range from travel stories to thoughts on hot dogs (of course), but its strength lies in its over-the-top, wacky, and unapologetically explicit style; Hanawalt’s subtle satirization of refined taste takes a back seat to her raunchy and goofy tone. Hot Dog Taste Test would be an appropriate addition to collections serving patrons who are particularly interested in pop culture or leisure reading.

Concluding the award-winning March Trilogy, March: Book 3 is the first graphic novel to win the National Book Award and was also awarded an Eisner for Best Reality-Based Work. For those unfamiliar with the series, U.S Representative John Lewis witnessed and played a pivotal role in the Civil Rights Movement of the 1960s. The March Trilogy tells his story of the Civil Rights Movement intertwined with his time directly before and after President Obama’s inauguration. Each book tends to focus on one big event: the sit-ins, the March on Washington, and Selma Marches.

This volume picks up exactly where Book 2 left off, the 16th Street Baptist Church Bombing in Birmingham on September 15, 1963. Thicker than the previous books, Lewis and Aydin recount the deadly events that led up to the Selma Marches and the 1965 Voting Rights Act. Nate Powell’s black and white art helps instill the seriousness of these events. He often utilizes a variety of panel and transition styles on each page, also helping to draw the reader into these situations. This, and the rest of the series, is a must addition to any library wanting to represent a variety of perspectives on the Civil Rights Movement and/or build a strong graphic novel collection.

Gauld details the humorously mundane and isolated life of a police officer, Mooncop, on his daily rounds in a mostly unpopulated science-fiction lunar colony. He spends his days making casual small talk, wrangling defective robots, and consuming coffee and donuts alone in a barren landscape. As his fellow moon citizens migrate back to earth or are replaced by automatons, Mooncop is forced to confront his own impending obsolescence, as well as his growing loneliness.

Mooncop forgoes action sequences in favor of quiet meditations and charming interactions. The artwork resembles Gauld’s weekly comics in The Guardian—figures and backgrounds are starkly minimalist and lighthearted. With sparse dialogue and a limited palette, Mooncop’s narrative depends on the visual fundamentals of storytelling. Libraries serving students enrolled in illustration programs, especially for students in introductory courses, should consider adding this title to their collections. 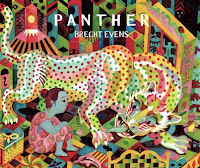 A bright and visually mesmerizing book, Panther tells the story of a young girl who is visited by a mysterious Panther every night after her father puts her to bed. Panther appeared after her cat died, so the girl feels even more attached to her nightly visitor who tells her anything she wants to hear. What sounds like something that would be great for kids is actually the opposite. As it progresses, Panther turns dark and disturbing, potentially triggering for those that have experienced or witnessed abuse. Paired with the vibrant colors and surreal style, Evens’ work feels more unique by his lack of adherence to the panel and speech bubble standard in comics. This would be a great addition to a graphic novel collection serving comics and/or illustration students and collections hoping to include less typical examples of the medium.

The first volume of Paper Girls, released in 2015, tells the tale of four twelve year-old girls as they started their paper route early on November 1, 1988 and the strange things that happened that day. The second volume of this multi-Eisner award winning series (Best Artist and Best New Series in 2016, Best Colorist and Best Writer in 2017) picks up right where Volume 1 left off: in 2016! Forty year-old Erin is now faced with her twelve year-old self and friends she doesn’t remember having while on the other side of town two giant tardigrades battle each other. Fans of Netflix’s Stranger Things will enjoy the 80s originating, girl power sci-fi story accompanied by Cliff Chiang’s simple yet detailed style. The colorist, Matt Wilson, helps set the mood of something supernatural mixed with something very familiar and nostalgic. Libraries serving patrons interested in comics and illustration would be wise to purchase both volumes, as the series and its creators have won the top awards in the industry. 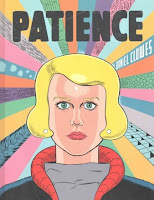 Patience unravels the love story of a man named Jack after his wife, Patience, is found murdered. Jack grieves his loss for years before discovering a time travel machine, which he uses in attempt to save Patience. Jack becomes trapped in the past and encounters a slew of mysterious characters that reveal the traumatic history of his late wife. Though Jack continues to obsessively protect his wife, he finds himself pitted against an era in which he doesn’t belong, as well as struggling with his own self-imposed isolation. Patience’s dry tongue-in-cheek humor falls in line with Clowes’ Ghost World (1997) but offers a more colorful, energetic, and adventurous narrative that heavily borrows from science-fiction. Already slated for a film adaptation by Focus Features, Patience is recommended for any library with collections of popular graphic novels or leisure reading. 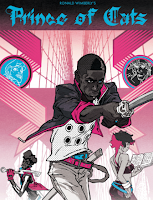 Prince of Cats is an adaptation of Shakespeare’s Romeo and Juliet that places Tybalt on center stage in 1980s New York City. In the spirit of Baz Luhrmann’s 1996 cult classic, Romeo + Juliet, Wimberly liberally weaves together Shakespearean prose with modern American slang, creating an anachronistic world filled with unexpected quips. The illustrations channel the frenetic energy of Japanese anime, coupled with a neo noir-inspired color scheme of stark blacks and vibrant pops of color. The result is a timely pastiche that freshly re-packages Shakespeare for a 21st-century audience. Originally published in 2012, this hardcover reprint released by Image should be collected especially for patrons interested in urban studies, comparative literature, postmodernism, critical race theory, and Black and African American studies.

Rolling Blackouts is an autobiographical recollection of Glidden’s travels to Turkey, Syria, and Iraq with two friends who, as independent reporters, are documenting first person accounts of the effects of the Iraq War. Joining Glidden and the two reporters is a former American Marine and current college student, Dan, who is both excited and nervous to return to the Middle East after his tour in the region years ago. Glidden, who also created How to Understand Israel in 60 Days or Less (2010), provides a platform for multiple perspectives to interact in a fascinating dialogue about personal narratives and war. The book is richly supported by the ethical discussions and conflicts that arise especially between Dan and the local inhabitants, as well as the interpersonal issues that arise among the protagonists.

Illustrated in soft watercolor, Rolling Blackouts approaches these controversial topics with both sensitivity and frank honesty. Glidden lends a voice to a diverse cast of people beyond her own cohort, from taxi drivers to displaced students. Rolling Blackouts would be a fantastic addition to collections serving those interested in Middle Eastern studies, journalism, communications, international relations, political science, and themes of (the Iraq) war and its consequences. 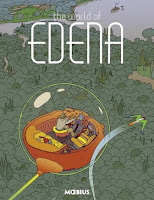 The World of Edena details the sci-fi adventures of two close friends, Stel and Atan, in a futuristic world where humans have grown accustomed to automated machinery, regular organ transplants, and a genderless culture. Stranded on a seemingly uncharted planet, Stel and Atan soon discover a massive pyramid structure occupied by a refugee camp of eclectic non-human species. The pyramid transports them to Edena, a new world where Stel and Atan face unexpected transformations, including emerging sexual impulses and gender identities. The two eventually find themselves separated, and they embark on intersecting journeys through alternate worlds, weaving in and out of alien civilizations and states of consciousness.

An award-winning series originally started in the mid 1980s, this reprint of Giraud’s classic includes introductory text by the artist himself. This text appears at the very beginning of the book as well as before each chapter, contextualizing the contents of the narrative with Giraud’s process. Particularly revealing is Giraud’s occasional note on his own artistic development. With this original commentary, coupled with the illustrations’ minimalist “Clear Line” style, The World of Edena would be appropriate for collections serving patrons who work in illustration, from novices to experts. Considering the themes prominent throughout the narrative, the title might also appeal to those interested in utopian studies, postcolonial studies, gender studies, and queer theory.

Many thanks to the SIG members who voted to create our list!